URF shouldn't come back until you make a new map for it!

CaptainMårvelous (NA)
submitted in Maps & Modes
#***Please hear me out before you downvote!*** URF mode was great, yes, but there was also some fundamental problems with it being on Summoner's Rift! For one thing, Blue buff is completely invalidated and basically pointless to have. 80% CDR and Free mana? Oh dear, whatever shall I do with this? Two, with the jungle changes, bringing URF back would result in junglers having powerful smites up at almost all times, along with being able to get jungle buffs from every camp in one go. Finally, objective buffs like Baron and Dragon are both devalued because of your strong base stats and obscenely easy to get with some champions lacking cooldowns. There are some other things like Wards being devalued due to the fast pace of the game mode, stronger emphasis on wall hopping/teleporting, etc. What I propose is an entire new map when you bring back URF. Rather than using a 1:1 SR copy, let's get something new! * Same basic layout of SR. 3 lanes, 5 champs, a small jungle, some bushes, etc. * Replace Baron/Dragon with either A.) A teleporter that will swap between these two dens or B.) A new monster/creature that will require more than one champion present to deal with it. * Perhaps item-specific options for this mode. Frozen Heart might be cool but that cooldown and mana is kinda pointless, so let's make a similar reworked item for it. Same with unholy grail, morellos, etc. * Finally, mix up the jungle a bit so that there are buffs you want. Hell, put two red buffs there and I'm sure people would be content. However, where would this new map be? Freljord? Ionia? Well, imo.... http://i.imgur.com/WIJ4ym2.jpg?1 Let's put the map on Zaun. Replace the lanes of grass with streets, towers, and seedy back alleys. The contrasting map essence would be that one half of the map is an industrial wasteland full of hextech machinery, factory workers and more while the other half would be a disgusting slum/ghetto filled with gangs, mutated critters and sewage. 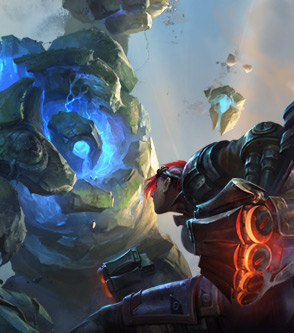