FIRST BLOOD: The Stats Behind The Slaughter


Your XP bar creeps towards level 3. The enemy minion wave is starting to thin, and you’ve been able to bully their Ahri in lane. You last-hit one more minion. Level up. It’s time.

You flash forward and execute your full combo, weaving in autos because you’d obviously never forget to do that. You drop ignite (which is bound to "D," like a civilized human) and get off one last auto just before Ahri flashes back behind her tower into the fog of war. You wait.

And then you hear it:

No matter how it goes down, first blood is a big deal. It gets both you and your team off on the right foot, and can be a delightful opportunity to explore the finer points of coordinated mastery emote and dance spamming. But how big of a deal is first blood? Which champions get it the most? Who gets the most out of it? The answers lie below.


First blood doesn’t just plop down on your doorstep. It requires skill (theoretically), timing (sometimes), and the ability to dish out some serious damage. Which champions, then, are most likely to bag first blood? We looked at all ranked games on Summoner’s Rift over the course of patch 7.3 (I see you, lethality) to see who stood atop the first blood game. We calculated First Blood Rate as the percentage of games that a champion appeared in where they secured first blood.

Parkour enthusiast and lethality apologist Talon reigns supreme as king of first blood, notching the first takedown of the match in a whopping 25 percent of the ranked games he plays in. Fellow assassins Pantheon, Katarina, and LeBlanc also ride high on the chart.

First blood isn’t just for lane bullies, though. A host of early game junglers such as Lee Sin (17.8 percent), Kha’Zix (16.7 percent), and Elise (16.0 percent) also fall in the top 15, proving once and for all that just because you can’t farm creeps doesn’t mean you can’t farm champions. No matter AP or AD, lane or jungle, there’s no substitute for good ol’ fashioned early game burst when it comes to first blood.

What’s that, you say? “But what about champs like Zed, Annie, and Kassadin which blow me up with frightening consistency even though I should definitely be expecting it?” Glad you asked, summoner! Even though they have some serious all-in potential, Zed (38th, 11.9 percent), Annie (63rd, 9.3 percent), and Kassadin (76th, 8.6 percent) still have some room for improvement in their first blood stylings, likely due to how critical their ultimates are to deleting folks. And, if you think about it, Pantheon can’t just wait around until level 6 to spear you to death. He’s got things to bake.

Although our ult-gated buddies may not have the most potent first blood potential, they’re working with an embarrassment of riches compared to the bottom of the list. Janna, in all of her tornado-slinging, glacially slow auto-attack glory “secures” first blood in only 1.7 percent of the games she plays. The picture isn’t that much prettier for the rest of the support squad, with traditional supports rounding out the entirety of the bottom ten. Even bot lane terror Blitzcrank (aka Mr Steal Yo Kill) only pulls in first blood 1 out of every 20 games. For all of you playing support purely for the glory, I urge you to reconsider. 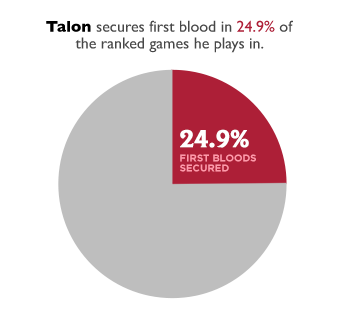 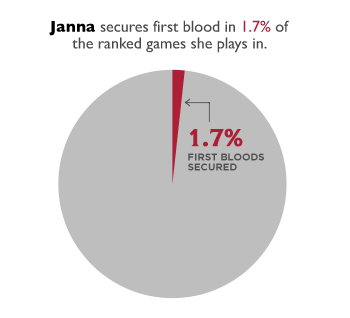 
Now that we know who’s getting first blood, let’s find out who’s actually doing something with it. One way to think about this would be to compare champion win rates when they get first blood (WRfb) versus their win rate when they don’t (WRnfb). This gives us an idea of how much of a win rate boost is associated with a champion scoring first blood. Using the highly technical formula WRfb - WRnfb, we derive the cutting-edge FBB, or First Blood Bonus.

Rengar, everybody’s favorite crusher of marksman dreams, gets the biggest dose of catnip from first blood, going from a 49 percent win rate without first blood to a 63.4 percent win rate with it—a whopping 14.4 percent FBB. That, combined with his healthy 15.4 percent First Blood Rate suggests you might want to steer clear of the kitty in the early game. The going is also good for marksfolk like Draven, Kalista, Jinx, Tristana, and Sivir, who all have between a 12.5 percent and 14 percent boost in win rate associated with the opening takedown. [Note: I’m being uncomfortably deliberate in using the term “associated” here to imply correlation and not causation. Although first blood likely increases your chances of winning, it’s also likely to fall to the better team more often than not. In the current analysis, we don’t attempt to tease apart these elements.]

At the bottom, it’s not all resets and adoration stacks. Tanky supports (Taric, Alistar, Leona) and traditionally full tank solo laners (Trundle, Sion, Shen) reap comparatively small benefits from first blood, likely due to their power scaling expressing itself as “being real good at not dying” rather than “being real good at killing other stuff.” What I’m trying to say is if you’ve gotta feed, feed the tank. It’s also worth mentioning that the solo queue Blitzcrank in your game who is “definitely gonna carry” is one of the least effective at translating first blood into a juicy FBB. Stick to the laugh spam, bud.

“Firsts” on the Rift

With all of this talk of win rates and first blood, it’s starting to look like a pretty scary thing. We know it’s nice to have, but how does first blood stack up to other “firsts” on the Rift in terms of team success?

Across all ranked games in Patch 7.3, the team that secured first blood registered a respectable 59.4 percent win rate. In comparison, grabbing first tower (71.7 percent), dragon (68.3 percent) or Baron (81.5 percent) were all associated with much higher rates of team success—and it makes sense. First blood can be anything from a mechanical outplay or well-timed gank to absent mindedly walking face first into an all too willing to accept tower. First blood favors skilled players and clutch plays, but it’s a pretty noisy signal when it comes to predicting team success.


On the other hand, objective-based plays around towers or epic monsters often require far more teamwork, cooperation, and set-up to lock in. Furthermore, first tower, dragon, and particularly Baron tend to happen far later in the game than first blood, after leads have been built and carries have begun to emerge. As such, it’s reasonable to think about them in large part as indicators of previous success in the game (“we’re crushing them, so we can take dragon for free!”) rather than purely predictors of what’s to come. Here’s what this all boils down to: even though first blood is powerful, it isn’t do or die. As my parents always said: “wash behind your ears and play the objectives.”

Gather ‘round and take a knee, summoners. Let’s talk about what we’ve learned. First, life isn’t fair and first blood isn’t for everyone (unless you’re Talon). Second, champions vary drastically in how well they capitalize on first blood. If you must feed, locate the nearest tank. Third, first blood isn’t everything. It stings to give it up, but bagging objectives is correlated with a much higher chance of team success. Run your face into Baron, tell ‘em boom bear sent ya. Finally, if you give up first blood to that Blitzcrank spamming his mastery emote—sleep well. He’s not gonna do squat with it. 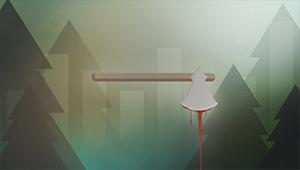 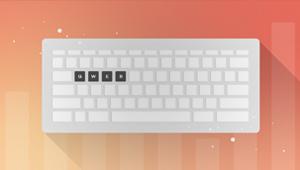 TURBO MODE:
The Data Behind Your Spell Spamming 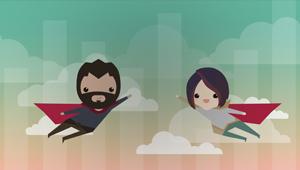